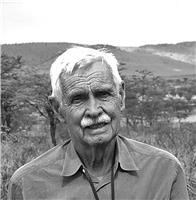 BORN
1927
DIED
2021
FUNERAL HOME
All Souls Cemetery and Mortuary - Long Beach
4400 Cherry Ave.
Long Beach, CA
Our beloved father, William A. Eddy, M.D., died peacefully at home last month. He was surrounded by his children, grandchildren, great-grandchildren, and extended family members. Known as Bill to friends and family, he lived a full and action-packed life with our mother Joan.

Our dad's early days were modest. He was born at home in Cleveland, Ohio in 1927. His father, a blind piano tuner, died when he was three years old and when our grandmother was expecting our dad's only sibling, Jim Eddy. His mother worked multiple jobs and raised her sons in public housing in Cleveland and Youngstown. Our dad would look back fondly on his youth and reveled in memories of playing stickball in the streets with his pals, walking to school through the snow and riding on the city street trolley.

Dad attended Catholic schools through high school, largely on scholarships. He entered college at age sixteen and graduated from Western Reserve University (now Case Western University). His education was disrupted in 1946 when he was drafted into the Army and served our country in Alaska, Virginia, and Petaluma, California. The latter posting sparked his lifelong love for California. In 1948 he returned to Case and graduated at age twenty-one. He enrolled at New York Medical College under the G.I. Bill and graduated with an M.D. degree in 1952.

Dad met our mother at a Halloween dance at Flower Fifth Avenue Hospital in New York City, where he toiled as a medical student and she as a nursing student. Both frequently reminisced about their sweet courtship. They married in 1952 during a blizzard in Malvern, NY, a union that would last for six decades. The couple began their new life together in Brooklyn, bearing four children. Sadly, two of our siblings perished as infants before we could know them. In 1958, the family of four made a bold journey across the country and arrived in Long Beach, California. Five more children were added to the family and we were raised in a home centered on family, friends, and church. When asked how he and Mom could handle seven kids at once, Dad would casually reply, "Well, the older kids took care of the young ones." Our parish, Our Lady of Refuge, was fundamental to our upbringing.

Our father operated an independent OB/GYN practice in Long Beach from 1958 to 1995, while also working on the St. Mary's and Memorial Hospitals' staff. He was supported by an exceptional office staff and talented colleagues. Our home phone would ring at all hours of the day and night, mostly calls from the hospital, to which he never hesitated to respond. Along with providing primary medical care for women, it is estimated that he delivered over 7,000 babies. He continued to review medical journals into his 90s.

Dad wrote a biography towards the end of our mother's life and said that "Joan and I were almost always together, with few exceptions." Together they traveled extensively to faraway places, including all seven continents. They were not deterred, even after being shipwrecked off the coast of Antarctica. They biked in the Solvang Century, the Tour de Tucson and other bike races with their faithful group of friends. They managed to balance their careers and family life with social time, friendships and bridge nights. Together, they made life a wonderful adventure.

In addition to their own children, our parents were blessed with fifteen grandchildren and four great grandchildren. They cherished their Eddy, Finney and Buonocore nieces and nephews scattered across the country. Mom and Dad welcomed our spouses and partners into the family and Dad often bragged of his in-law's successes. To our parent's many friends and neighbors, thank you for making their lives complete and so much fun.

Our father was preceded in death by our mother Joan, his brother, Jim, our sister, Rosemary and brother, Paul. He is survived by his children Peter, Jane, John, Mary, Margaret, Bill Jr. and Sally. Dad, we miss you immensely, but your spirit lives strong among us.

Private services are pending, in lieu of flowers, please send a donation to Our Lady of Refuge Church or the Boys and Girls Club of the Los Angeles Harbor.
Published by Gazette Newspapers from Feb. 25 to Mar. 5, 2021.
To plant trees in memory, please visit the Sympathy Store.
MEMORIAL EVENTS
To offer your sympathy during this difficult time, you can now have memorial trees planted in a National Forest in memory of your loved one.
Funeral services provided by:
All Souls Cemetery and Mortuary - Long Beach
MAKE A DONATION
MEMORIES & CONDOLENCES
14 Entries
Dr. Eddy (Bill) was one of my earliest clients as a broker at the Long Beach office of Merrill Lynch during the 1980´s and 90´s. He and Joan were exceptional people -exceptionally kind, loving and understanding - one could not have had better clients or friends. I am happy to find that he lived such a long fulfilling life - we all should wish for the same thing ourselves. God Bless........
Lance Hicks
Work
November 2, 2021
Dr. Eddy was the best doctor ever. He was was mother's doctor and my five siblings. I will forever miss and and love Dr. Eddy. Peace in heaven
Beverly Fleming
Friend
March 24, 2021
He gave birth to my 4 kids,1972,1975,1978 and 1980 who gave us 14 grandchildren. From all of us, our deepest sympathy.
Marietta Delos Reyes
Acquaintance
March 10, 2021
Dr Eddy delivered my first born son in 1995, Thank you for all you have done and those you have helped enter this world!
Monica
Friend
March 7, 2021
It is with sadness I hear of the passing of Dr. Eddy. He was the doctor who helped my mother bring me into this world in 1969. From what I hear he was an excellent and caring physician!
Darla Long
Acquaintance
March 4, 2021
Dr Eddy delivered 2 of my boys and he was the most calming Dr I have ever had or knew. He delivered my first in 1980, and my second in 1985. I later would run into him when I picked up running, always smiling and I would tell him looking good Dr Eddy, he would laugh and wave. May you RIP
Mary Ann Snook-Roccapalumbo
Friend
February 27, 2021
Thanks to your dad for helping me and my brother and sister being born.
I remember my mother Jackie Muis always talking about your Father. He had a great life may he rest in peace.
Jeanne Muis
Acquaintance
February 26, 2021
May the love of friends and family carry you through your grief. Dr. Eddy you will be fondly remembered for your kindness and care of women and babies for decades.
Robin Shaw-Ivester
Coworker
February 25, 2021
My sympathy to the entire Eddy family. I worked in L&D with Dr. Eddy for 20 years at St. Mary's & LBMMC. He was a kind, caring man & he taught me so much. I saw him a few years ago - he knew me immediately - not surprising he always had a great memory. I will always remember seeing him running in the park every morning as I drove to work.
Debbie Miller
Coworker
February 25, 2021
Dr. Eddy delivered all six of our children and, me, several surgeries. He was a very kind, patient, and a supportive physician whom I had until he retired. We enjoyed his letters at Christmas. He was also the doctor for our oldest daughter, Chris. His daughter, Sally, was a friend from St. Anthony's of our daughter, Nancy. His caring of his patients was a gift from God. He left a mark and will be greatly missed. God Bless him, his wife, and his family.
Marie Van Vooren
Friend
February 22, 2021
Dr Eddy was such an admirable man. He was my doctor for many years until his retirement. He delivered both of our children, brought me through 2 emergency surgeries, and was a dedicated physician and all around a great guy❤
Kathy Wade
Friend
February 21, 2021
I met Dr Eddy in 1983 when I left Montreal Canada to set practice at StMarys in Long Beach Ca , he was always a very kind and caring physician and a practicing Catholic although we never had a close association we showed professional respect and appreciation for each other .. he was a very fine gentleman and a good physician, May God keep him in his glory
Dr Alberto de Leon
Sir Alberto de Leon Md
Coworker
February 20, 2021
I’m so sorry for your loss. I remember him as a very wonderful man. Brenda Forster Mott.
Brenda mott
Neighbor
February 20, 2021
A great and caring doctor. Delivered two of my children one by c-section, displayed much empathy and generosity for my husband was not employed at the time. Also his wife gave birth at same time our son was born. My sincere condolences to the family remembering a wonderful soul that contributed so much to society. Love Maxine and Henry
Andrews Carson CA.