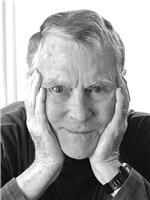 BORN
1936
DIED
2021
In 2011 many of us received an email from Spike reassuring us that Rumors of His Demise Were Greatly Exaggerated. Somehow the universe had conspired to have another William "Spike" Bragg pass away at that time. With heavy hearts we must now report that his actual demise has in fact come to pass, on April 25, 2021.
Our Spike Bragg merits the description of One of a Kind, if ever anyone did. "Life is meant to be gulped, not sipped," is one of his many favorite sayings. If by chance you are employed as a checker at his local grocery store, rest assured that you now know the identity of that guy in his 80's who told you his hot chocolate joke, or complained about being treated as a sex symbol. Maybe you now understand the stranger on the crowded elevator who announced "I bet you're all wondering why I called this meeting?"
Or perhaps you know Spike as the old guy in the Tilley hat walking his golden retriever in the Belmont Shore neighborhood. He might have reminded you that by the way, "the time spent laughing and smiling cannot be deducted from your lifespan." Spike played baseball with guys 30+ years his junior until he was 70. He had a lifelong love of music, cherishing his time as a member of the 8 'n 1 acapella group at Phillips Academy (Andover, Mass.), and performing his favorite country and Sinatra songs, with guitar, through his adult life, including stints at local bars.
"Life is about choices." None of Spike's children will ever hear this phrase without thinking of him and the accompanying stories-and, well, lectures-intended at difficult junctures to clarify that, make no mistake, "you alone have both the responsibility and the ability to shape the outcomes in your life." Spike's own choices reflect the high value he placed on education. Spike not only made the best of his education (Phillips Academy; Yale University, BA in Economics, magna cum laude and Phi Beta Kappa; and Harvard Business School, MBA), but supported the education of his four kids to his utmost- that is, financially, verbally, frequently, and without hesitation.
It is impossible to calculate all the people whose lives have been touched by Spike. Spike was preceded in death by his parents Bill and Elsie, who instilled in him the importance of education and believed in his potential, and his loving sister, Sue. His surviving family include: his wife Ricky; his kids Laurie, Karen, John, and Casey and their spouses Jeff, Lloyd, Franciz, and (close enough) Conor; his brother Mike; his ex, Lynn; his grandchildren Justin, Michaela, Jake, Cammie and Clay; his nephew Kevin and his niece Lisa and her children Makenzie and Madison; his niece Kate and her children Elizabeth and Jack; and his dog, Kona.
Spike's long career spanned many successful years as a marketing strategist. About the marketing business he said "I love to be part of growing something. . . but my work also has something to do with fun. If it isn't fun, who needs it?"
His second career was spent building and running his business, Fighting Chance. Selling information that has helped thousands of car buyers save hundreds of thousands of dollars, Fighting Chance broke ground in the consumer automobile domain, exposing the inner workings behind the sticker price on a new car, providing buyers with unprecedented negotiating leverage and making car dealers very uncomfortable.
Spike loved life and he did not want to let go of it. For those of us who loved him, the world without him will be missing a big piece, but we're grateful to have been touched by a person with an immense capacity for positivity. His glass was definitely half full-of champagne.
To plant trees in memory, please visit our Sympathy Store.
Published by Gazette Newspapers from Jun. 18 to Jun. 25, 2021.
MEMORIAL EVENTS
No memorial events are currently scheduled.
To offer your sympathy during this difficult time, you can now have memorial trees planted in a National Forest in memory of your loved one.
MEMORIES & CONDOLENCES
0 Entries
Be the first to post a memory or condolences.