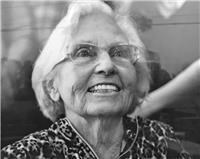 BORN
1924
DIED
2021
Virginia Field Wiltz passed away peacefully on December 17th, 2020. She was born in Buffalo New York on October 1, 1924 – the only child of Gordon and Mae Bell, and grew up in Darien Connecticut.
After High School, she attended and graduated from Bucknell University in Pennsylvania in 1944 with a degree in English. She was also a member of the Delta Zeta sorority.
Virginia began work in New York City, but became unemployed due to the many service men returning home from WWII. At this time, an adventure opportunity arose for her to travel across the country with friends. When the girls reached Los Angeles, one of them became ill and could not immediately return east. Virginia, with her huge gift of compassion, stayed behind to help her recover. She found a room for them at a boarding house, and soon met a man living a few doors down who would eventually become her husband – Donald Francis Wiltz, 1926-2006. Virginia decided to stay out west, and the rest, as they say, is history.
Don and Virginia married in 1952 and bought their first home in Los Angeles. They had two sons, and in 1958 Virginia began her 25 year long career with the Los Angeles Department of Social Services. The couple relocated to Whittier where they welcomed their daughter in 1965, and eventually settled in Long Beach in 1973.
Virginia retired in 1983 and enjoyed many years of traveling with her husband, family and friends. They had homes in Cabo San Lucas BC, and in Kailua-Kona HI – where Don could enjoy his love of deep sea fishing. In later years they would split their time between Long Beach and Hawaii, Virginia never wanting to be away from her children and grandchildren for long. They were also active members of the Long Beach Yacht Club and traveled around the world with the Anglers. After Don passed away in 2006, she spent the remainder of her years in Long Beach near her children.
Virginia was a kind and inspiringly wise woman. She always had a sensible answer for whatever question, and would have made a great Jeopardy contestant. She was a voracious reader and always found a library in the many towns she found herself in. She will be remembered as a gentle and compassionate wife, mother and friend and will be greatly missed by her survivors – son Jerry and his wife Marian, son Michael and his wife Narda, daughter Nikki and her husband Ted, and by eight grandchildren and two great-grandchildren
She will be interred, alongside her husband of 54 years, at Rose Hills Memorial Park. Her service will be held on January 16th at 3:00 in the Gardens Tent.