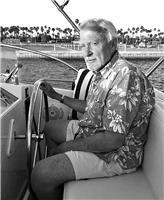 Tom was a product of Long Beach. He was born at Harriman Jones Medical Clinic and Hospital when it was located at Cherry Avenue and Broadway. He attended Lowell Elementary, Rogers Junior High and Wilson High schools. He lived in Long Beach except when a student at college (Occidental) and law school (USC), and an officer in the United States Coast Guard (New London, San Francisco and Alaska).

Tom thoroughly enjoyed being a lawyer. His practice included business law and providing estate planning for clients for over fifty years. His career began at Ball, Hunt, Hart and Brown.

Volunteering was a big part of his life. It included serving on the board of directors of Long Beach Community Hospital (where he was the board chair), and the boards of local, regional, state and national hospital associations, and the Committee of 300 (as a founding member, initial general counsel and board member). Tom was also on the board of the Pacific Coast Sailing Foundation where he served as its President.

Of course, much of Tom's time was spent with boating and being near or on the water. As a youth, he lived on the Alamitos Bay Peninsula and as an adult lived on the Boardwalk where his sons were raised.
At age eight, Tom's first sailboat was a gift to him from Arthur Looff, his father's political benefactor. While a youngster, Tom's adoptive sailing fathers were Sid Exley, Llewellyn Bixby, Jr. and George Hart. Tom remained with sailboats until later in life when he crossed over to powerboats, becoming the proud skipper of a series of Grand Banks trawlers. Once he turned to cruising, for many years he owned a mooring in lsthmus Cove at Catalina Island. As a boater Tom was a member of Leeway Sailing Club (during his youth), Alamitos Bay Yacht Club (where he served as Commodore), Los Angeles Yacht Club (where he also served as Commodore) and the infamous Emerald Bay Yachting Squadron.

Tom is survived by Darlene, his spouse and the love of his life. He is also survived by his sons, Jeff and Scott, and grandchildren John and Julia.

To plant trees in memory, please visit our Sympathy Store.
Published by Gazette Newspapers from Oct. 3 to Oct. 10, 2019.
MEMORIAL EVENTS
Oct
11
Celebration of Life
4:00p.m.
Alamitos Bay Yacht Club
East Ocean Boulevard,, , Long Beach, CA
MEMORIES & CONDOLENCES
2 Entries
I loved seeing Tom pull into the office lot in his hot Porsche! OR, seeing him waiting for the bus with his back pack! A true renaissance man!
Prayers for peace to his wife and children.
Karen A Anderson
October 7, 2019
Tom was extremely knowledgeable about LB and CA and legal luminaries. He as very proud of his father, the late Al Ramsey (The Silver Fox) . He will be missed. Vern
Vern Schooley,
October 7, 2019
Showing 1 - 2 of 2 results