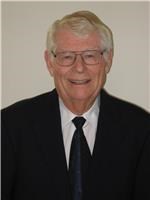 BORN
1927
DIED
2019
Born on August 9, 1927 in Durham, North Carolina to Chester Schley Clayton, a semi-pro baseball player, and Hildred Clayton (nee Ritchie), a school teacher. The following year, they moved to California, where the family grew to include an eventual six children, of whom Sterling was the eldest.
Sterling graduated from Wilson High School in 1945, from Long Beach City College in 1949 (following a 1 ½ year stint in the U.S. Army), from Stanford University in 1951, and from Stanford Law School in 1953.
He played varsity basketball at Long Beach City College from 1947 to 1949, and he was honored as the LBCC "Outstanding Male Graduate of the Class of 1949." Years later, he was an original founder of the Long Beach City College Foundation, where he was a board member for 10 years, board president for 2 years, and a trustee until his death. He was inducted into the LBCC Hall of Fame in 1990.
Sterling practiced law in Long Beach from 1954 until 1994. He was president of the firm of Kilpatrick, Clayton, Meyer & Madden from 1976 until 1989, when he retired and became "of counsel" to the firm.
He was active in the Long Beach Bar Association, serving two terms on its board of directors, and as its president in 1976.
He served for 3 years on the California State Bar Disciplinary Committee, and another 3 years as a member and then chairman of the California State Bar Association Committee on Rules of Civil Procedure.
Sterling's principal hobby was golf, which he played for over 70 years. At the Meadowlark Golf Club in Huntington Beach, he served two terms on the board of directors, and he was president of the Meadowlark Men's Club in 1965.
He was a member of the Old Ranch Country Club in Seal Beach from 1966 until 1971. In 1973, he joined the Virginia Country Club of Long Beach, where he remained a member until 2016. He served two terms on the VCC Board of Directors, and he was president of the club from 1986 to 1988.
Sterling's charitable interests included the Long Beach City College Foundation, the Long Beach Boys and Girls Club, Stanford University, and Stanford Law School.
Sterling is survived by: his much-loved wife Geraldine (Jerry) Clayton; sons Scott and Mark from his first marriage to Legia Clayton, who passed in 1972; granddaughters Savannah and Camille, from Scott's marriage to Julia Clayton; Mayde Herberg, Mark's long-time companion; his five siblings – Dan Clayton (and his wife Darlene), Dora Lane (and her husband Bob), Ross Clayton (and his wife Kris), Ann Stark (and her husband Mike), and Jack Clayton (and his wife Petra); his five step-children from his prior marriage to Carolee Belavia – Siobhan Ruckle, Marianne Nies, Elaine Cameron, Stephanie Braly, and Steven Walsh; and his two step-children from his current marriage – Michael Phelan and James Phelan.
A private service was held on September 11th for family members.
In lieu of flowers, donations may be made to the Sterling S. Clayton Scholarship Fund at the Long Beach City College Foundation.
Emails may be sent to [email protected]

To plant trees in memory, please visit our Sympathy Store.
Published by Gazette Newspapers from Oct. 7 to Oct. 17, 2019.
MEMORIAL EVENTS
No memorial events are currently scheduled.
To offer your sympathy during this difficult time, you can now have memorial trees planted in a National Forest in memory of your loved one.
MEMORIES & CONDOLENCES
0 Entries
Be the first to post a memory or condolences.