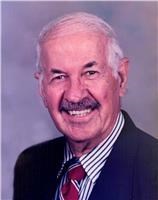 BORN
1924
DIED
2020
Martin Joseph Sherlock passed away on April 27, 2020. Marty was born in Youngstown Ohio on June 18th, 1924, the son of the late Jacob and Frances Sherlock. At the age of 17, following Pearl Harbor, Marty enlisted in the United States Navy. During the war he served on the Aircraft Carrier USS Yorktown. His ship fought in 8 major Battles including Tarawa and the Battle of the Philippine Sea. During the war, the Yorktown set a record for being at sea for 118 days without seeing land.

After the War, Marty and his family packed up their car and traveled west along Route 66. The family arrived in Long Beach, California. Marty graduated from Long Beach City College and attended USC, which helped prepare him as a life insurance agent for Transamerica Life. Marty developed a passion for golf and every Friday could be found on a local Long Beach course playing with the same foursome he played with for years.

Marty was married to Helen and enjoyed 59 years of marriage. Marty instilled in his children and grandchildren a tremendous work ethic, responsibility to neighbors, faith, and the belief in always doing the right thing. This is a legacy that his children will carry with them throughout their lives. The Boy Scout Oath and Promise is something he held close to his heart. He completed all the requirements for Eagle Scout right before the War broke out. It is evident that his experiences helped shape his character and his life. Marty was also a member of the Santa Ana Jaycees where he won the Prestigious Spoke Award.

Martin Joseph Sherlock, a great husband, father, grandfather and American. Marty spent his later years restoring cars, collecting watches, model airplanes and cars, and playing the harmonica, which brought great joy to all those around him. Marty was amazed at the accomplishments of his grandchildren.

In lieu of flowers, the Sherlock family requests that donations be made to U.S.S. Yorktown CV-10 Association or Fr. Al's Outreach. fatheral.org

To plant trees in memory, please visit our Sympathy Store.
Published by Gazette Newspapers from Jun. 19 to Jun. 26, 2020.
MEMORIAL EVENTS
No memorial events are currently scheduled.
To offer your sympathy during this difficult time, you can now have memorial trees planted in a National Forest in memory of your loved one.
MEMORIES & CONDOLENCES
0 Entries
Be the first to post a memory or condolences.