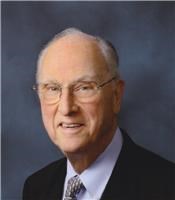 BORN
1929
DIED
2021
Gene Ray Bouch, MD, a devoted husband, loving father and grandfather, and dedicated physician passed away on July 30, 2021 in the arms of his wife and two sons.

Ray was born on April 3, 1929 in Ford City, Pennsylvania to Walter and Rowena Bouch. He attended Ford City High School and Penn State University before attending the University of Pittsburgh where he received his Medical Doctor degree in 1955.

After medical school, Dr. Bouch interned at Seaside Memorial Hospital and later served in the USAF as a Captain. Ray returned to Long Beach in late 1959 and began practicing in Family Medicine where he served many families in this community with passion and dedication for 53 years.

Dr. Bouch was on the active staff at Memorial Medical Center for that entire duration and over the years applied his experience and leadership to numerous Memorial Hospital boards including as the Chairman of the Family Practice Residency Education Committee and member of the Memorial Cancer Institute board. He also served the broader medical community for over a decade as a member of the Board of Directors of the State of California Academy of Family Physicians.

Dr. Bouch was deeply committed to his profession and the education of upcoming physicians. In addition to his teaching and training efforts at Memorial Medical Center he also served in various professorial capacities at UC Irvine. He was admired and appreciated by his students for his patience and thoroughness as well as his unparalleled commitment to care and service for his patients.

Ray's passion was not limited to the field of medicine. In 1967, he fell in love with Shirlee Boyd Lister and they were married the following summer on June 16, 1968.

Additionally, he was dedicated to his community and volunteered is time with the Boy Scouts of America and the Rotary Club.

In lieu of flowers, please consider donating to mind.UCI.edu for the support of their Alzheimer's research efforts.
Published by Gazette Newspapers from Aug. 13 to Aug. 20, 2021.
To plant trees in memory, please visit the Sympathy Store.
MEMORIAL EVENTS
To offer your sympathy during this difficult time, you can now have memorial trees planted in a National Forest in memory of your loved one.
MAKE A DONATION
MEMORIES & CONDOLENCES
8 Entries
My condolences to Dr, Gene Ray Bouch's family. Dr. Bouch was the family doctor for all of the Hammond's that lived in Long Beach - the Horton and the Jack Hammond families. We loved Dr. Bouch who took over the practice for Dr. Matlock who used to make house calls to the Hammond residence when I was little. May he be remembered by all whom he cared for.
Barbara Hammond-Wagner
September 2, 2021
As President of Memorial Medical Center Foundation for 25 years and a member of Rotary Club of Long Beach.....I knew Ray Bouch, MD professionally and personally for a long time. He was one of those rare people who made a positive impact on all who knew him...a person one was lucky to know. His colleagues, friends and family miss him, but will remember him fondly forever.
Donna M. Reckseen
August 14, 2021
Dear Shirlee and family, Your beloved husband and father blessed our family over many years until we attended his retirement party next to the "oh so familiar" office. As our primary care physician, he was always there to see us when we really needed him....a kinder, caring man would been impossible to find. Ray has a better address than all of us nowMay you find joy and peace in all the beautiful memories he left you.
Brenda and Randy Turnbow
August 12, 2021
Dr Bouch was a wonderful and caring doctor to our family for over 25 yrs until he retired. Our prayers go out to Shirlee and his children.
Sandy Jeglum
August 10, 2021
Mrs. Bouch and family, my sincerest condolences. Dr. Bouch was a wonderful doctor and took great care of my family.
Ronnie Kline
Other
August 10, 2021
Ray was a thoughtful and kind person. The best example of a true gentleman. He will be dearly missed by all that knew him. All our love and prayers to Shirlee, Allen, Charley and family.
Suzanne and Dave Nosworthy
August 9, 2021
The best doctor anyone could ever have! He was our doctor from the beginning until he retired. Our thoughts and prayers are with Shirlee and family.
Claudia and Roger Langner
August 9, 2021
Ray with such a gentle person, always offering a smile and a kind comment. He will be missed by so many who were fortunate enough to know him. Our deepest sympathies to Shirlee and the family.
Jill and Lewis Rosenberg
August 8, 2021
Showing 1 - 8 of 8 results