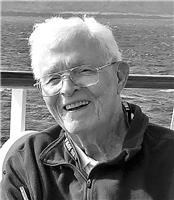 BORN
1926-2020
E.L. "Demi" Demmon passed away peacefully on June 14th surrounded by his children. Also known as "Jim" during his retirement years, Jim was fun, witty and quick with a joke or story for almost any occasion.

Jim, or "Demi" (as he was known during his youth and work career) was born on October 9, 1926 and raised in New Orleans, LA. In 1944, Demi joined the Navy ROTC program at Tulane University then transferred to University of Minnesota where he graduated with a degree in Mechanical Engineering in 1948. He joined Honeywell Corporation in 1949 where he spent his entire 43-year career, primarily in Los Angeles and Washington DC. He paused his work career to serve in the Korean War as a Navy Lieutenant on the carrier USS "Princeton".

After the Korean War, Demi resumed his career and on a blind date arranged by his sister, met the love of his life Jean Dahl. They were married in Los Angeles in 1954 and began their life together briefly in Dayton Ohio. Demi and Jean moved back to California in 1955 where they raised their family in Los Alamitos until 1972. Demi then accepted a position as the Eastern Regional Sales Manager for Honeywell, relocating the family to Vienna, Virginia until 1976.

Demi had a successful career with Honeywell, including major contributions to the Apollo program. After relocating to Saratoga California in 1979, Demi retired in 1992, when he decided he preferred the name Jim. He joined "SIRS" (Sons In Retirement) and was very active for many years, traveling all over the U.S. and the world including trips to Europe, Africa and Asia. He and Jean had many friends in Saratoga, and their home was a central gathering spot for family and friends alike.

Demi was predeceased by his beloved wife Jean in 2010 after 56 years of marriage. In 2015, Jim relocated to Southern California to be closer to his children, residing first in Long Beach and later in Orange.

Jim is survived by his 3 children Anne (Ron) Tanner, John (Patty) Demmon and Steve (Jennifer) Demmon. He is also survived by 7 grandchildren, 7 great-grandchildren, his brother-in-law Robert Dahl, along with several nephews and his niece Kathleen (Sissy) DiFranco Dahl who lived with Demi and Jean for several years. Jim was predeceased by his father E.L. Demmon Sr., his mother Doris, and sisters Doralese and Carol.
To plant trees in memory, please visit our Sympathy Store.
Published by Gazette Newspapers from Sep. 17 to Sep. 23, 2020.
MEMORIAL EVENTS
No memorial events are currently scheduled.
To offer your sympathy during this difficult time, you can now have memorial trees planted in a National Forest in memory of your loved one.
MEMORIES & CONDOLENCES
0 Entries
Be the first to post a memory or condolences.