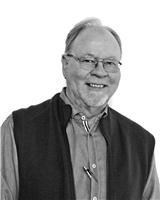 Byron Warren Pinckert – husband, father, architect, and novelist – said repeatedly, "I have led a storybook life blessed in every way possible." At 70 years, he passed away on March 3, 2021, in Long Beach, CA.

When Byron learned of his diagnosis of incurable cancer on February 5th, he said to family, friends, and colleagues, "Upon reflection, all of the richness, meaning, and purpose that have enfolded me, seem like a bargain balanced against a decreased quantity of a few more years."

He was thankful for his wife Nancy Pinckert, his two children Ginnichris and Dylan, the good fortune to live in what he termed an island paradise, and for the opportunities to provide service during his life.

Born September 28, 1950, Byron's career path locked into architecture when he was in the first grade. As he told the story, his family hired an architect to design a new house in the foothills of Southern California. Byron watched the architect drive up in a shiny new silver XKE Jaguar and knew he would one day become an architect with his own silver Jaguar. His predestined career in architecture was successful beyond the acquisition of a silver Jaguar.

Byron was a founding partner in the Irvine, CA-based architectural firm HPA, Inc. with Dennis L. Hill. Dennis, then at Peter Lendrum and Associates, remembers hiring Byron in 1978. Hill said he was "impressed with Byron's design skills and his analysis of design. Byron was the first person in eight years that I met that I thought was a better designer than I was!"

In 1980, Hill and Pinckert formed their own architectural firm focusing on commercial buildings. When they sold the firm in 2008, there were 19 employees with $18 million in billing. The firm has currently designed more industrial facilities than any other architecture firm in the country. Byron continued at HPA maintaining an active role in HPA's design and architecture projects.

During the early 1980s, through mutual friends, he met Nancy Tormey. They were married in 1985. Since service was an important component of Byron and Nancy's life together, they were a dynamic team with each playing different roles and making significant contributions to the organizations they touched. For Byron, "the richness and satisfaction of life comes in great part from being of service."

Byron and Nancy were deeply involved in the founding of Westerly School of Long Beach which opened in 1993 with modular classrooms next to a small park. Byron spent two tenures as a member of the Westerly Board of Trustees, led fundraising and construction efforts for the Raymond F. Bizjack Arts Village in 2008 and fundraising, design and construction of permanent classroom and administration buildings in 2016.

"Byron was the touchstone for Westerly's philosophy from our earliest days," remembers founding President of the Board Sonja Berggren. "A constant guide, he kept us on track as the Chair of the Finance, Building and Strategic Planning Committees and as Westerly's architect. Byron became the motivating force behind the realization of Westerly's permanent campus. True to form, the design reflects the school's mission. Byron was a gifted visionary whose imprint is embedded in the grounds and soul of Westerly School."
"Byron's legacy is felt across Westerly and is carried on in all the nooks and crannies of our stunning campus where students learn, create, play, and explore," said current President of the Westerly School Board of Trustees, Dr. Shalu Gupta.

As their children matriculated, Byron continued to support their educational efforts. As a parent member of the Long Beach Polytechnic Music Program Parent Group, Byron designed a successful fundraising campaign called a "Practice-A-Thon". This became an annual event which has added much needed resources to the Poly Music program.

Byron and Nancy's son Dylan, an avid water polo player, was grateful for Byron's support through his high school and college years. Dylan lovingly called his dad, a "water polo referee's worst nightmare." Dylan continued, "My water polo teammates and coaches will definitely remember how, let's go with 'animated,' he was at games… Others will remember him as the quiet, spiritual architect who worked until 1 a.m. in the morning. He loved his work, and he loved his family."

In his ongoing role as project architect at HPA, Byron traveled frequently between the office in Irvine and the satellite office in Oakland, CA. He used this travel time to indulge in one of his favorite activities: journaling. Sitting in an Oakland bagel shop and writing in his little black notebook, Byron noticed there was an unfamiliar voice in the entry he was writing. The journal piece about observations that day was not coming out of his usual "omniscient ramble." The new musings went on the pages as a first-person narrative.

Between novels, Byron had a non-fiction writing project. Seeking to tap into HPA's expertise in the booming distribution warehouse market, the commercial real estate development association NAIOP approached Byron to update his book Rules of Thumb for Distribution/Warehouse Facilities Design. The new, revised version ($300 for non-members) was published in 2020.

But Byron's quiet spirituality was always evident. It was embodied in the service he provided to Meher Mount, a universal spiritual retreat center in Ojai, CA, dedicated to Meher Baba. Since 2007, when he articulated a creative vision for the center's Master Plan, Byron continued to share ideas that evolved into physical structures and guidelines for a long-range development vision for Meher Mount.

"Byron was a true visionary, friend, and scholar. He will be missed," said Meher Mount Board President Sam L. Ervin.

This past December 2020, a family friend remembers dropping off a Christmas gift at the Pinckert home. Meeting Byron outside, she looked up, breathed in the ocean air, and said to him, "The day here is so different from the day elsewhere. You are lucky." Bryon titled his face to the sun and said, "I am lucky."

In lieu of flowers, the family suggests that donations be made to the General Fund of Westerly School of Long Beach in Byron's honor.
To plant trees in memory, please visit our Sympathy Store.
Published by Gazette Newspapers from Apr. 15 to Apr. 16, 2021.
MEMORIAL EVENTS
No memorial events are currently scheduled.
To offer your sympathy during this difficult time, you can now have memorial trees planted in a National Forest in memory of your loved one.
MEMORIES & CONDOLENCES
2 Entries
In loving memory of a wonderful person. We will love you and miss you always.
Jodi & Mark Frankel
Friend
April 11, 2021
Beautiful Man. Beautiful Family. Condolences. Our Hearts go out to you on your loss.
Kredell family
Friend
April 11, 2021